Despite a growing acceptance amongst the public, and some politicians of the value of automatic fire sprinklers, there is a continuing reluctance to fit sprinklers in new schools in both England and Northern Ireland.

Within the nations of the UK there are different governmental approaches to the fitting of sprinklers in schools. Whilst the English government takes an almost “laissez faire” approach to this vital topic the devolved administrations in Scotland and Wales take a proactive approach – sprinklers are mandatory in all new and substantially refurbished schools in both countries.

BAFSA is calling on the Government to require the installation of automatic fire sprinklers in all new built and substantially refurbished schools in England and Northern Ireland and we are not a lone voice,  leading bodies in the built environment have signed a joint statement to this effect, including the retrofitting of sprinklers in existing school buildings when relevant refurbishment takes place.

Did you miss the “Why children, teachers & communities need automatic fire sprinklers in schools” webinar which was held on 10th February 2021?

“The Building Regulations do not require the installation of fire sprinkler suppression systems in school buildings for life safety and therefore BB 100 no longer includes an expectation that most new school buildings will be fitted with them.”

“Burnt out schools and classrooms cause major disruption to children’s education, with repairs leading to months or even years of upheaval. They also result in the loss of spaces which local communities rely on out of school hours” Tilden Watson, Zurich Insurance

“Automatic fire sprinklers save lives both Firefighters and the public; they also protect the valuable building stock of the country and allow our children to have an uninterrupted education” Keith MacGillivray MBE, BAFSA

“The case for sprinklers is compelling. Of almost 1,000 fires over five years in buildings where sprinklers were fitted, our research found they controlled or extinguished blazes in 99% of cases” Nick Coomb, National Fire Chiefs Council

“Achieving a more consistent approach to life safety and sprinkler installations in schools that draws on best practice from all the UK nations would provide clarity to the industry and help better protect the public and communities” Joint statement : RIBA, CIOB, RICS, NFCC

If you would like FREE printed resources for your school/library/workplace, click here to email BAFSA in the first instance. We will be happy to send them to you.

Wade et al (2007)1 report that, in addition to the direct and indirect economic impact of school fires, there is a significant emotional, social and educational detriment to children following large loss, school fires. The impact on children’s education is not just based on lost course work, but often includes longer travelling times, disrupted social groups and poorer facilities due to overcrowding.

Regardless of what criteria is used to assess the impact, it is the enforced absence from school which is the issue not the cause of that absence, which begs the question “if measures can be taken to address absences and absenteeism from all other causes, why is more not being done to reduce the impact of fires in schools?”

School buildings also play host to community clubs and groups thus school fires have a devastating impact on the communities which those schools serve, along with the environment and the disruption to students, teachers, and families.

The fitting of automatic fire sprinklers by Third Party Certified Installers using approved components in schools will ensure that fires are controlled or extinguished in their early stages. The cost of fitting sprinklers in schools is very cost effective if they are planned in the initial stages, this then gives the building automatic fixed fire protection for its full life provided the system is maintained and serviced regularly.

Tilden Watson, Zurich Municipal’s Head of Education, said: “An alarming number of school buildings pose a high fire risk – yet many are poorly protected against a potential blaze.  Unless Ministers bring England into line with other parts of the UK, where sprinklers are mandatory, large fires will continue to blight schools.  This is harming children’s education and putting lives at risk”

Nick Coombe, Protection Vice Chair and Building Safety Programme Lead for the National Fire Chiefs Council, said: “The case for sprinklers is compelling.  Of almost 1,000 fires over five years in buildings where sprinklers were fitted, our research found they controlled or extinguished blazes in 99% of cases.  We want to see a greater inclusion of Automatic Fire Suppression Systems (AFSS), including sprinklers, across the built environment.  Sprinklers can dramatically reduce fire damage, making the reopening of a school much easier”.

As well as protecting pupils, sprinklers drastically reduce the extent of damage when there is a blaze, often confining the fire to a single room.  This gets children back into schools and classrooms quicker as well as saving taxpayers’ money.

In their joint statement, RIBA, RICS, CIOB and the NFCC state “Fire safety of occupants and firefighters is of primary concern. Loss of schools in a community can have devastating effects. Recent research has evidenced the number of fires in schools and the benefits AFSS would bring. Achieving a more consistent approach to life safety and sprinkler installations in schools that draws on best practice from all the UK nations would provide clarity to the industry and help better protect the public and communities”.

For the health, education, welfare and prosperity of future generations, protect children teachers and communities from fires… fit sprinklers in school throughout the United Kingdom and Northern Ireland.

[1] Wade P, Teeman,D., Golden, S., Wilson, R., and Woodley V. (2007). The impact of School Fires; a study of the wider economic and social impacts on schools and the local community. Slough; NFER

An electric heat lamp in the animal care classroom of a Newcastle school malfunctioned causing a fire with over 200 people on-site. One sprinkler head activated which confined the damage to the room of origin and extinguished the fire.

A number of small animals were in the room involved and all survived whilst no other areas of the school were affected. Damage was limited to a wooden bench and minor smoke damage accounting to less than 1% of the whole building. Damage was repaired quickly. 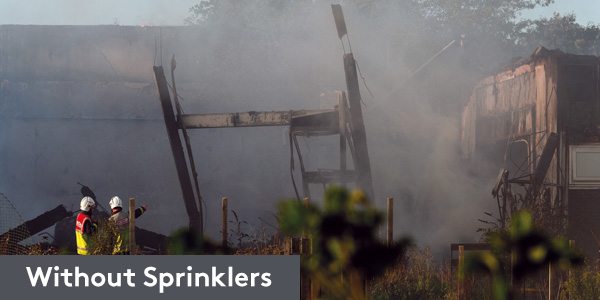 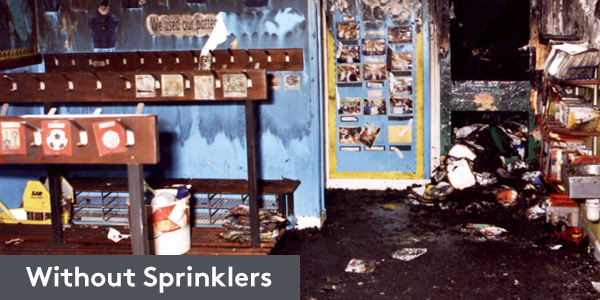 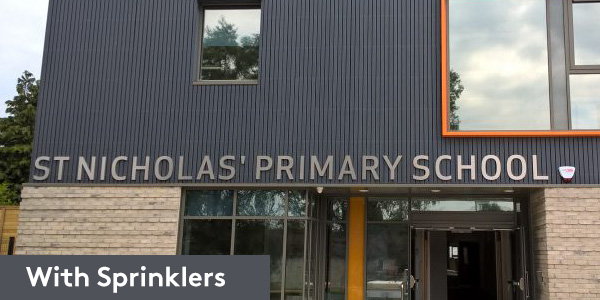 Leading bodies call for installation of sprinklers in all schools

NFCC reiterates its calls for schools to be fitted with sprinklers

how does a sprinkler work?

View our BIF
View our Pamphlet